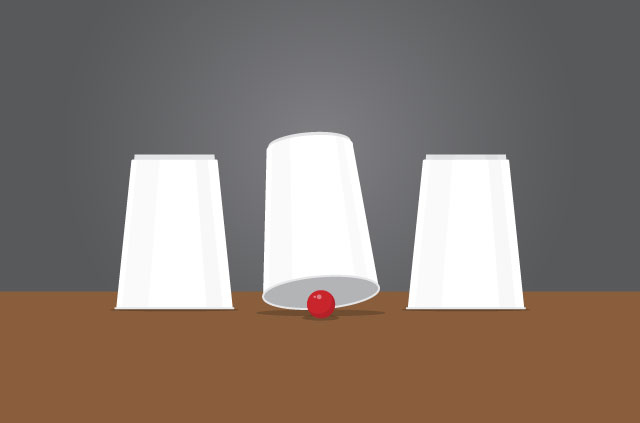 Long before the internet, people cheated each other in more and less creative ways. Three particularly imaginative scammers managed to sell the Eiffel Tower (twice), ruin an entire economy, and convince people to simply hand them free stuff.

Here are our three most favorite scam stories:

3. William Thompson convinced everyone to trust him with stuff

William Thompson lived in the mid-19th century in New York City and was likely the first person to become widely known as a “confidence man”—a type of swindler that became hugely popular in the buzzing metropoles of the late industrial revolution.

As a “confidence man,” Thompson would exploit the naivete of people he met in the streets, bars, or events with a type of social engineering scheme dubbed a “confidence trick.”

Thompson would walk up to people in a friendly way, greet them and give the impression the two had met before. After gaining the trust of a stranger, Thompson would simply ask:

“Have you confidence in me to trust me with your watch until tomorrow?”

Unbelievably, this worked. Thompson managed to repeat the trick on various people before authorities caught up with him.

Somehow, the “you can trust me, give me your watch” trick became so popular it inspired a whole generation of confidence artists. One woman, Bertha Heyman, even continued to find victims while locked up in jail. Bertha’s scheme was more elaborate than Thompson’s and quite similar to today’s “419 Fraud” (the Nigerian Letter Scam). Heyman would claim to have lost access to her enormous fortune, and needed a bit of financial help to get it back.

The Eiffel Tower was constructed for the 1889 World Fair, coinciding with the 100-year anniversary of the French Revolution. At the time, it was the tallest structure built by humans and kept that title for 41 years (until the Chrysler Building in New York surpassed it).

In 1925, when Victor Lustig was 35 years old, he learned how expensive the tower had become to maintain. He subsequently came up with the idea to sell the Eiffel Tower to a scrap metal dealer.

Lustig found the most gullible scrap metal dealer he could to give a quote and even managed to have a sizeable bribe added for good measure. He got away with it, too—the scrap metal dealer was so ashamed to be tricked that he didn’t go to the police.

After the scam, Lustig moved to Vienna in a train with suitcases full of cash. He considered the fraud so successful that he moved back to Paris the next month to do it again with another separate scrap metal dealer. Although he did not succeed a second time, he was still able to evade arrest.

In the United States, George C. Parker carried out a similar con when he sold the Brooklyn Bridge. Several times. Police had to repeatedly remove barricades of buyers who attempted to set up toll booths.

In India, a man named Natwarlal became famous for having sold the Taj Mahal, the Red Fort, and the Parliament House. He was last seen in 1996 at the age of 86 and is thought to have died in freedom sometime between 1996 and 2009.

Alves dos Reis was born in Lisbon in 1896. And when he was 28 years, old he printed himself so much money that he caused an economic crisis that led to a nationalist military coup d’etat.

Reis forged a contract with the Bank of Portugal that authorized him to print a new set of banknotes and approached the company that previously printed Bank of Portugal notes, Waterlow and Sons, to make all the new cash.

As the printers used legit, original plates to print the banknotes, the forgeries were perfect.

Reis had 200,000 bank notes printed, worth almost 1% of Portugal’s entire GDP, comparable to publishing about US$2 billion in currency today. At one point, nearly half of 500 Escudos note was fake.

In fact, Reis had so much money, the businesses, real estate, and luxury goods he bought created a boom in the economy.

Reis used a bank he acquired in Angola, a Portuguese colony at the time, to launder the money before, brilliantly, he attempted to buy himself a stake in the Bank of Portugal to retroactively approve his unauthorized notes.

Eventually, Reis was found out by journalists of O Século, a newspaper owned by tycoon Alfredo de Silva who saw Reis as a competitor.

The extent of Reis’ conspiracy was so large that few believed it could have been carried out by a single person. The government and the courts suspected that not only corrupt employees of the National Bank could have helped Reis, but that he also had support from the German government in an attempt to take over control of Angola.

The most famous scammers were mostly unable to enjoy their fortunes. Many went to jail, were shot by their former victims, and some even fell for other scammers in their greed—and the conviction they were the smartest people alive.

Keep your eyes open for scams and stay careful on the interwebs!